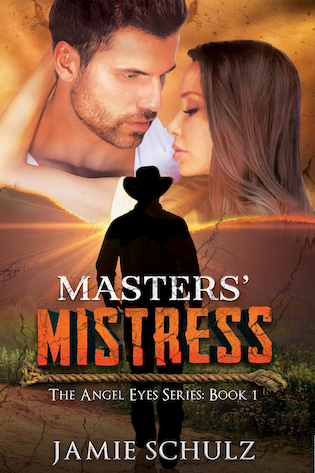 A man bound by chains. A woman burdened by regret. Will love set this tortured pair free?


In this nightmarish future where women own men, Bret Masters refuses to serve anyone. But after spending years evading slavers in the mountains of the Pacific Northwest, he’s furious when he’s finally caught and sold. So, although his mistress has a pretty face and deliciously tempting curves, he vows to escape.
Angel Aldridge hides her pain behind fences as sturdy and vast as her ranch. And even though her newly acquired slave is a ruggedly handsome cowboy, she’s not about to let her fantasies endanger the people she swore to protect. But between her always-watching enemies and her wounded heart, she’s reluctant to admit she may need him in more ways than one…
As the two toil side by side, Bret is surprised to discover Angel’s vulnerability and her compassionate nature. And the more time they spend together, the harder she finds it to resist her feelings and to soothe her lonely soul. But when they’re stranded alone together, the barriers between mistress and slave may not be strong enough to withstand their red-hot attraction.
Can Bret and Angel overcome their fears to sow the seeds of lasting love?
Masters’ Mistress is the steamy first book in The Angel Eyes futuristic dystopian cowboy romance series. If you like complex characters, gritty western settings, and slow-burning desires, then you’ll adore this enthralling story.

Are you a book reviewer?
You can request an ARC here!

Author Bio:
Jamie Schulz lives in the beautiful Pacific Northwest with her family, her husband, and their fur babies. Writing has always been a big a part of her life, and she hopes to one day reach the best sellers lists.
Cowboys, ice cream, and reading almost any kind of romance are among her (not so) secret loves. To her, every one of her stories, no matter how dark, must have a happy ending, and she strives to make them impossible to put down until you get there.
She balances her free time between reading her favorite romance authors--in genres ranging from erotica and dark romance to sweet historicals and contemporary romance--and spending time with her family.

I had it all. Family. Career. A future. Until a couple of bikers took it brutally away from me. They scarred me both inside and out, killing the man I once was. Jared Koynakov is dead and Koyn rose from the ashes.

Ten years later, I live by a code that is shaped by hate, anger, and revenge. As prez, I’ve built a brotherhood of men who share the same thirst for vengeance and are loyal until the end. Together, we will find those bastards and end them.

Every last one of them. All it takes is one slip, and I almost have them in my grasp. Until a pretty pageant girl, who looks far too much like my daughter, steps into the fray causing the ultimate distraction. I must choose between my revenge and being her savior.

I’m one helluva biker with a taste for torture, but I’m an even better daddy…