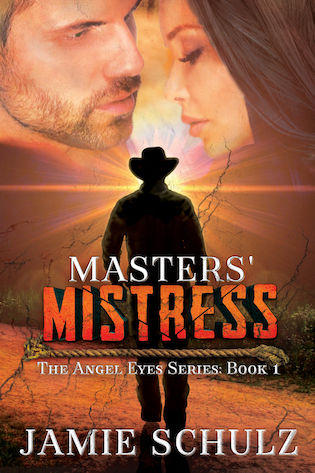 A man bound by chains. A woman burdened by regret. Will love set this tortured pair free?
In this nightmarish future where women own men, Bret Masters refuses to serve anyone. But after spending years evading slavers in the mountains of the Pacific Northwest, he’s furious when he’s finally caught and sold. So, although his mistress has a pretty face and deliciously tempting curves, he vows to escape.
Angel Aldridge hides her pain behind fences as sturdy and vast as her ranch. And even though her newly acquired slave is a ruggedly handsome cowboy, she’s not about to let her fantasies endanger the people she swore to protect. But between her always-watching enemies and her wounded heart, she’s reluctant to admit she may need him in more ways than one…
As the two toil side by side, Bret is surprised to discover Angel’s vulnerability and her compassionate nature. And the more time they spend together, the harder she finds it to resist her feelings and to soothe her lonely soul. But when they’re stranded alone together, the barriers between mistress and slave may not be strong enough to withstand their red-hot attraction.
Can Bret and Angel overcome their fears to sow the seeds of lasting love?
Masters’ Mistress is the steamy first book in The Angel Eyes futuristic dystopian cowboy romance series. If you like complex characters, gritty western settings, and slow-burning desires, then you’ll adore this enthralling story.

Author Bio:
Jamie Schulz lives in the beautiful Pacific Northwest with her family, her husband, and their fur babies. Writing has always been a big a part of her life, and she hopes to one day reach the best sellers lists.
Cowboys, ice cream, and reading almost any kind of romance are among her (not so) secret loves. To her, every one of her stories, no matter how dark, must have a happy ending, and she strives to make them impossible to put down until you get there.
She balances her free time between reading her favorite romance authors--in genres ranging from erotica and dark romance to sweet historicals and contemporary romance--and spending time with her family.

Read for FREE in KindleUnlimted: Amazon

I’m the master of my world. A ruler from the skies of a lost planet. The ship captain who watches from above. Until an alien invades my heart and everything changes. She’s from another world and doesn’t want saving, for she’s on a quest of her own. Feisty and fiery, she burns bright like the sun. I crave to capture her and keep her. To hold the sparkling female in my arms forever, uncaring if I get burned. A chance mission given by my commander has us sequestered on the Mayvina all alone. I only have a few solars to prove to her how good we can be together. It’s simple to me: handsome mort plus lovely alien equals mates forever. Right? Wrong. Nothing I say or do has an effect. She’s as stubborn as I am good looking. She’s the one thing I can’t control. A star shooting across the sky, never meant to be caught. But I will catch her heart. It’s written in the stars. We can be more than a space fling. We can be everything. I just have to convince her first.

Also in the Series

Nicole Blanchard is the New York Times and USA Today bestselling author of gritty romantic suspense and heartwarming new adult romance. She and her family reside in the south along with their menagerie of animals.

Release Blitz ~ TAKEN WITH YOU by Carrie Ann Ryan

We are beyond excited to be sharing this release from Carrie Ann Ryan with you today! TAKEN WITH YOU is part of her Fractured Connections series and it is releasing as part of 1001 Dark Nights. It just went live today! Check out an excerpt and book trailer from the title below.


Purchase your copy of TAKEN WITH YOU today! About TAKEN WITH YOU:

From New York Times and USA Today bestselling author Carrie Ann Ryan comes a new story in her Fractured Connections series… It all started at a wedding. Beckham didn’t mean to dance with Meadow. And he really didn’t mean to kiss her. But now, she’s the only thing on his mind. And when it all comes down to it, she’s the only person he can't have. He'll just have to stay away from her, no matter how hard they’re pulled together. Running away from her friend's wedding isn't the best way to keep the gossip at bay. But falling for the mysterious and gorgeous bartender at her friends’ bar will only make it worse. Beckham has his secrets, and she refuses to pry. Once burned, twice kicked down, and never allowed to get up again. Yet taking a chance with him might be the only choice she has. And the only one she wants.


**For fans of Carrie Ann’s Fractured Connections series, Taken With You is book four in that series.** **Every 1001 Dark Nights novella is a standalone story. For new readers, it’s an introduction to an author’s world. And for fans, it’s a bonus book in the author’s series. We hope you'll enjoy each one as much as we do.**

Add TAKEN WITH YOU to your Goodreads TBR here!

Purchase your copy of TAKEN WITH YOU today! “Anyway, where have you been?” Violet asked.
I frowned. “Here? Where I am always.”
“You say that, yet you haven’t texted. No call. No note,” Sienna said, perfecting her perfect British accent as she pretended that she was Molly Weasley from the Harry Potter series.
“I’m fine. Really. Just busy working. And after the wedding, I figured everyone would be busy with cleanup and honeymooning and everything that brides are supposed to do on their wedding night.” I looked at Harmony, and she blushed even harder.
Apparently, she’d had a very nice wedding night.
“Well, considering you ran out of the reception, I wanted to make sure you were okay.”
I looked at Violet, noting the concern in her eyes.
“I didn’t run. I said goodbye.”
“And then you ran like there was a demon on your tail,” Sienna said. “We saw. Are you okay?”
“I didn’t see,” Harmony said quickly. “I was a little preoccupied. And I’m sorry about that. But what happened? Are you okay?”
We settled on the couches, and I set my hands in my lap.
I thought I’d hid things well. But from the way they looked at me now, I knew I hadn’t been entirely successful.
I’d never been very good at hiding.
The bruises on my soul were evidence of that.
“It’s fine.”
“What’s fine?” Violet asked, her voice stern.
“Beckham kissed me.” I hadn’t actually meant to say that. And as their eyes widened, and they leaned forward, I knew I was in for it.
Well…crap.
That secret was supposed to go with me to the grave. The kiss hadn’t meant anything. It couldn’t.
“He did? Did you not want it?” Sienna asked, frowning. “Because I’ll kick his ass for you, or I’ll have Aiden do it if that’s the case. He may be big and bearded and a little broody—although he’s not really bearded right now since he shaved for the wedding—but anyway, I will totally kick his ass if I need to. Or have it kicked.”
I shook my head quickly as Sienna continued to ramble.
“I’m fine. Really. He didn’t hurt me. Didn’t do anything wrong. But it can never happen again. It can’t. Totally not going there again.”
I slammed my mouth shut as the girls looked at me expectantly. New York Times and USA Today Bestselling Author Carrie Ann Ryan never thought she’d be a writer. Not really. No, she loved math and science and even went on to graduate school in chemistry. Yes, she read as a kid and devoured teen fiction and Harry Potter, but it wasn’t until someone handed her a romance book in her late teens that she realized that there was something out there just for her. When another author suggested she use the voices in her head for good and not evil, The Redwood Pack and all her other stories were born. Carrie Ann is a bestselling author of over twenty novels and novellas and has so much more on her mind (and on her spreadsheets *grins*) that she isn’t planning on giving up her dream anytime soon. 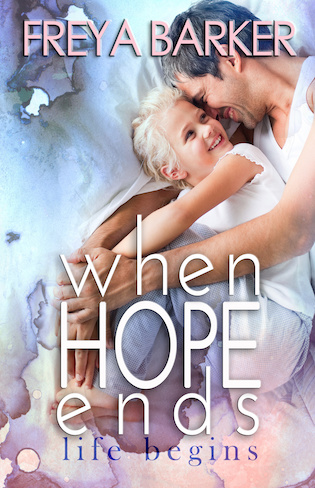 
It’s the best day of his life–the worst of hers.
She left her soul behind in the dead silence of a hospital room.
He is bright with hope after being so close to losing faith.
One moment in time leaves their paths unavoidably entwined.
An invisible connection held by one heart beating between them.

***Previously part of the anthology; Then There Was You.

I pull myself up and run my hands through my hair as I walk down the steps. There I turn back to her. “Stay.”
Her eyes brim with tears. “But the risk is—”
“Every day you get out of bed is a risk. You and I know better than most how true that is. Whether you’re here, or somewhere else, won’t make a difference once the truth is out there. If they dig they could still find us, and all those other families. Leaving won’t serve any purpose.” I’ve been pacing back and forth, but on my last words I stop and face her.
“I don’t know what the smart thing is to do.”
She wrings her hands in her lap and her teeth are biting her bottom lip so hard I’m afraid she’ll break the skin.
I’ll examine why it’s so important to keep her here later, but for now I place my hands on the stair railing to brace myself, and lean forward, my nose almost touching hers.
“Stay.” 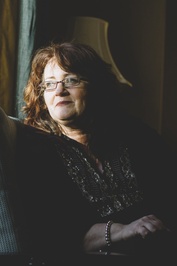 Author Bio:
Award-winning author Freya Barker loves writing about ordinary people with extraordinary stories.
Driven to make her books about 'real' people; she creates characters who are perhaps less than perfect, each struggling to find their own slice of happy, but just as deserving of romance, thrills and chills in their lives.
Recipient of the ReadFREE.ly 2019 Best Book We've Read All Year Award for "Covering Ollie, the 2015 RomCon “Reader’s Choice” Award for Best First Book, “Slim To None”, and Finalist for the 2017 Kindle Book Award with “From Dust”, Freya continues to add to her rapidly growing collection of published novels as she spins story after story with an endless supply of bruised and dented characters, vying for attention!