Today we have the release day launch for Love Me Crazy by Camden Leigh. We are so excited to share this fantastic new contemporary romance with you! Be sure to check it out and grab your copy today!

About Love Me Crazy:

“We’re broken in the most screwed-up perfect way. It was inevitable we’d end up together.”   Cassidy Beck is focused on one thing, and one thing only: planning the Southern wedding of the century in Lucas Hill, South Carolina. Fresh from a tragic breakup, Cassidy’s not in the mood for any distractions. But when antebellum hottie Quinn Covington arrives in all his sexy, tattooed glory, he might prove to be the biggest distraction of them all.   MIA ever since his father’s death, Quinn doesn’t plan to stay any longer than it takes to start his dad’s vintage truck. But the sight of Cassidy trying to fend off his family’s pet turkey sends him for a loop. Red-haired and fierce, she’s just as broken as he is. But even though Cassidy’s past makes her the only one able to understand Quinn’s own scars, they also make her wary. After all, how can she trust him with her heart when everyone else she’s ever given it to has thrown it away?   Sexy, heart-wrenching, and full of Southern charm, this new contemporary romance from Camden Leigh shows just what happens when two people who are perfectly broken end up piecing each other back together.

Camden Leigh is a sucker for first kisses, first hook-ups and anything that adds the unforgettable first sparks of love–humor, seduction, hot-n-sexy bods, angsty determination...what have you! Her stories expose the real dirt, grime and grit that befalls a seemingly perfect relationship, the heartache as a result, and the growth, perseverance and strength it takes to make flaws work for her characters. She wants her characters to experience love that wraps arounds their hearts, turns them into sizzling flames and results in a grand finale of fireworks.   When Camden isn’t writing, she’s either crafting, flicking through images of gorgeous paper, saturated palettes or...um, lip-lickin' washboard abs. When feeling guilty, she attempts to keep up with her energetic kiddos by beach combing, kayaking, golfing (can it really be called golfing if a seven-year-old beats you?) or being that crazy person at a concert. Her addictions: chocolate covered raspberries, real southern sweet tea (not the fake stuff with the sugar crystals hanging out in the bottom of the cup), her pups and pretty paper she’ll never use. 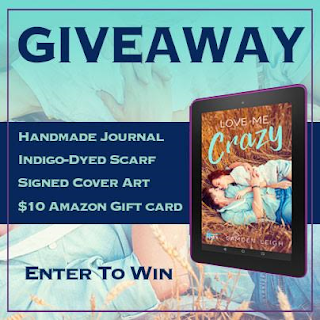 a Rafflecopter giveaway   Follow along during the blog tour....