When Elizabeth just barely made it through her first full moon as a werewolf, she thought the worst was behind her.
She was wrong.
While she struggles to control her temper and keep her wolf side at bay, she’s also juggling her old life as an attorney living in Raleigh, with being a werewolf in a pack in Asheville. Add in the fact that the man that attacked her is now killing women who look just like her, and she has her hands full.
Good thing she has Abraham by her side. The werewolf who’s apparently her fated mate is the sexiest man she’s ever met, and all hers. So, why can’t she give him her heart like he’s given his?
Can Elizabeth give up her old life in Raleigh and commit to Abraham and her new pack? If she puts aside her fears and stubborn pride, she might. That is if she can figure out who the serial killer is before he comes back for her. 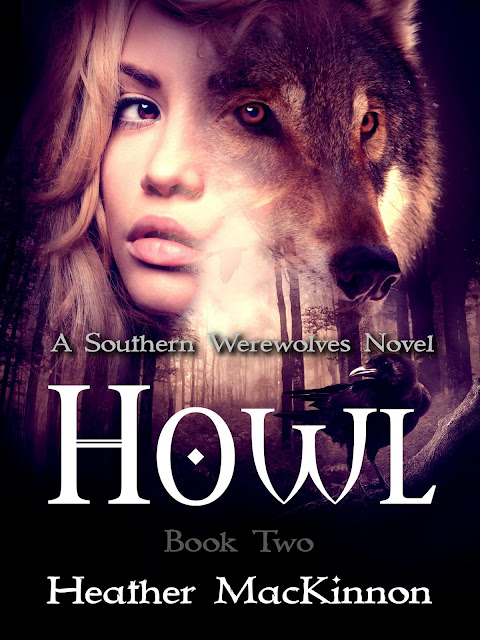 A high-pitched sing-song voice preceded our visitor. “Oh, Abey! I’m here to take care of you!”
Peyton, the pack mate who’d been the least welcoming and had proven on multiple occasions that she’d gladly get rid of me to get to Abraham, walked through his bedroom door. She came to a screeching halt, eyes widening in shock when she found us standing there. Abraham yanked his hand out of my shorts, the waistband snapping loud against my skin in the awkward silence of the room.
Her face reddened as she stared at where Abraham’s hand had been, and then up at me. Her eyes narrowed to thin slits as she placed her hand on her narrow hip.
“What the hell are you doing here?” she spat between gritted teeth.
My spine stiffened, and I took a step forward. “What the hell are you doing here?”
Abraham stepped around me and put himself between the two of us, his back to Peyton. He held his arms out wide as he tried to catch my eye. “Peyton is probably here to clean, El. That’s her job, remember?”
Peyton scoffed behind him, and he turned to her. “What other business would you have in my bedroom, Peyton?”
Her mouth opened and closed a few times while she floundered for a response. Finally, her eyes settled on me again. “Well, what the hell is shedoing here? Did you hire her for something too?”
Her insinuation wasn’t lost on me.
A deep snarl fell from my lips as my body began to shake uncontrollably. My vision narrowed as I watched Peyton’s pinched face study me from head to toe. It was clear she found me lacking.
“El, you need to calm down,” came Abraham’s placating voice.
“Yeah, El,” she sneered. “You need to learn your place, and it isn’t with him. You just got here. What, did you think sleeping with the alpha would get you somewhere in this pack? Well, get in line, honey.”
“Peyton! Don’t talk to her like that!” Abraham reprimanded, but it was too late.
The shaking in my limbs had now reached category ten.
Abraham was mine.
My bones cracked, and my muscles shifted as my body fell to the ground, deep in the throes of the shift. It was quicker this time and within seconds, I stood on four legs instead of two.
I shook out my coat, but the hackles raised on my back weren’t going anywhere. I stared Peyton down as a smug expression slid across her pinched face.
“God, Abraham, she can’t even control herself. She’s a menace.”
I snarled loudly and took a predatory step toward her before Abraham blocked my path.
“El, you don’t want to do this.”
What the hell did he know?
I bumped him with my head, nudging him out of my way so I had a clear shot at Peyton. She stood there with a satisfied smirk on her face, taunting me with her eyes. I growled again and took another step toward her.
Abraham stepped in front of me once more. “Elizabeth. Please.” His voice was deep, pulling at me, begging me to listen. I took a deep breath and tried to reign my temper in.
“That’s more like it. You might need to muzzle her in the future. We can’t have a full-grown wolf this out of control. It’s pathetic.”
That was it.
I launched myself at the dark-haired woman, ready to tear her to shreds when Abraham tackled me from the side.
We went tumbling into one of his dressers, splintering the wood. Clothes and debris rained down on us as I mindlessly tried to get out of his hold and sink my teeth into the skinny bitch just out of my reach. I clawed and squirmed, desperate to be free to act on the driving force in my gut that demanded I take out the threat against me and my mate.
I growled and pushed hard with my hind legs when I heard a short hiss of pain and smelled the coppery scent of blood in the air.
Abraham’s blood.
I went completely still while Peyton screamed like someone had set her on fire. “Oh my God, you hurt Abey! What is wrong with you?” She scrambled toward our still interlocked bodies, but Abraham halted her with a glare.
“Peyton! Leave. Now.” 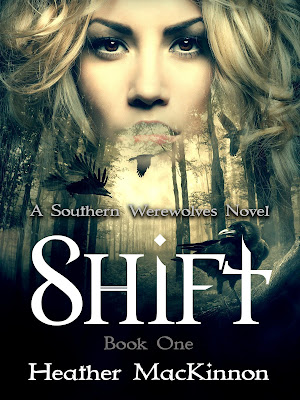 Heather MacKinnon is an author living in the research triangle in North Carolina with her husband and two troublemaking dogs. She grew up on Long Island and spent her young adult years in various states in New England. This led to her subsequent addiction to Dunkin’ Donuts latte’s and her gratuitous use of the word “wicked”. She’s tried her hand at many jobs throughout the years as she strove to find the one that made her happy. Heather has sold chicken, kitchen knives, auto body supplies, PR packages, and computer software. She’s been a cashier, a waitress, a cook, a hotel concierge, a phlebotomist, and an Uber driver. Though her jobs have been many, her passion has always been reading. She’d hide in the bathroom and read between sales calls, or find a lonely corner in the kitchen and whip out her kindle between waiting on tables. After a lifetime of enjoying other people’s words, she decided to write down some of her own.