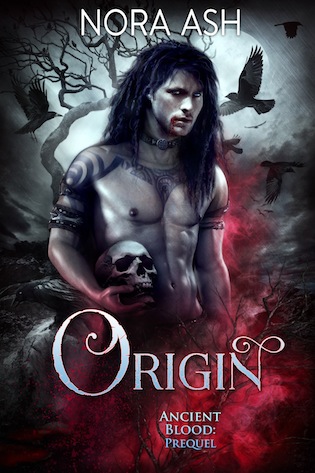 
Love is a curse.
Three hundred years ago, Warin lost his humanity.
The night he met Thea was the night he lost his soul.
For more than two hundred years, Warin has roamed the wilds with only his blood brother Aleric for company, terrorizing villages and feeding on human life. Sating his dark hunger was all he ever cared for…
Until she crossed his path.
From the moment he meets his beautiful Thea, her emerald eyes and tender heart call to him like a siren’s song. But she is human, and unless Warin can uncover the truth of their connection, he’ll never be able to possess her the way he so desperately desires.
Enlisting the help of the Ancients of his kind always comes with a cost. Especially when Thea is revealed for what she really is: either a gift from the gods…
…or a curse on his bloodline. 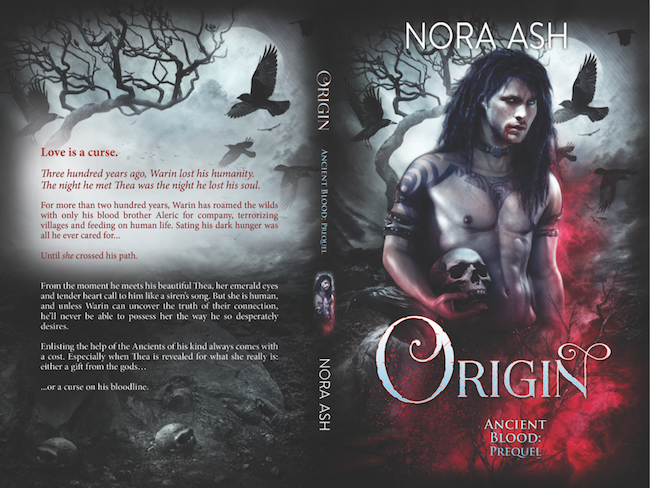 Author Bio:
Nora Ash writes the sort of books that have your toes curling and your blood pulsing. Her stories are often dark and always thrilling, with lots of sexy bad boys and the women who spur their desires. When not typing away at a story, Nora paints, eats chocolate or go for hikes around the English countryside with her very own bad boy.
Sign up to get updated about new releases at: http://www.nora-ash.com/newsletter/


I swore to protect her before I even knew her.
Now, it’s the creed I live by.
Uriah True is a dangerous man. His past is cloaked in secrecy, and he writes his future in the blood of the people he kills. After the Great Global War, he leaves the militias behind to prey on the scum that remain loyal to the cruel and tyrannical regime of the defeated enemy Omega in this dangerous and new post-apocalyptic world.
Some call him The Hunter. Some call him Death.
He calls it vengeance for what the war took from him.
Hunt, kill, repeat.
When he uncovers a plot that could bring death to the only person he’s ever loved, he’ll do anything to stop it.
Anything.
The only problem? He may already be too late.
A thrilling novel from #1 bestselling author Summer Lane, creator of the smash-hit Collapse Series, Zero Trilogy, Bravo Saga, Unbreakable Seal, and the historical romantic thriller, Running with Wolves. Vigilante is a novel

The moon shone brightly above my head. I glared at it.
It reminded me of fighting, of using moonlight to snipe. Shooting targets in the dark with Cassidy, popping rounds downrange and smelling the fresh scent of hot brass and cold dirt. Good practice and good times.
“Got any gum?” Cassidy asked.
“Yeah. But it’ll cost you,” I replied.
“Seriously? You can’t let go of capitalism for even one second?”
There was amusement in her voice. I held the piece of gum between my fingers for a moment. She made a move for it, and I backed away.
“Predictable,” I said.
“Then show me how to bring a man down,” she replied.
“You already know how to do that. You’ve got a rifle.”
“I want to know how to do it without a rifle. With my bare hands.”
“That’s optimistic of you.”
She was strong—agility and speed packed into a slender body, all lean, tough muscle. She would have been a good cop, I guess. Of course, they said the same thing about me, and look what happened.
“I’ll teach you,” I agreed. “But first, the price for gum.”
Gum. It was stupid. Even gum was a precious commodity now. I was down to my last pack.
“All right. Name it,” she huffed, rolling her eyes.
A kiss. That was what I wanted. To pull her to me and hold her body against mine and feel, even for a moment, that I deserved to be loved by someone like her.
I hesitated for too long. She blinked, slowly, and I knew she could read my mind.
She always could.
“You can keep it,” she said, brushing off my solemn stare. “Whatever.”
I tossed the gum to her. She caught it, neatly. No hesitation. Pure reflex.
“Thanks, partner.”
She was relieved: I could see it in her face. She had been afraid I would try to kiss her. That wasn’t allowed. She knew it and I knew it, but the desire was there, and I wasn’t the only one who felt it. Not by a longshot. That was what scared her the most…and nobody knew her better than I did.
“Got your six,” I murmured.
Memories. They’re fatal. You can’t get away from them.

Author Bio:
Summer Lane is the #1 bestselling author of 19 hit books, including the Collapse Series and hotly anticipated Resurrection Series. She owns Writing Belle Publishing and Writing Belle Magazine. She is also an experienced journalist and creative writing instructor. Summer lives in California with her husband, Scott, and their German Shepherd, Kona.

Meet the Masters of Blasphemy…


A note from Laura Kaye…

Another failed relationship has lawyer Jamie Fielding confronting the truth—he’ll never be satisfied with any woman until he admits what he needs…to submit and to be used—hard. When a friend invites him to the exclusive Blasphemy club, Jamie is stunned to find everything he ever wanted—in the fierce, ruthless hands of a man.

Psychiatrist Alex McGarry will play with anyone who craves his rough brand of domination, but what he really wants is to settle down. Which makes the submissive male he meets at his club a bad idea—the man might be hot as hell but he’s also new to everything Alex has to offer. Except that doesn’t keep them from coming together again and again, sating every one of their darkest desires.

Master Alex sets Jamie’s whole world on fire and makes him question everything—and that’s good. Because Alex won’t tolerate hiding what they have for long and he wants much more than just having Jamie on his knees...


PREORDER ON HIS KNEES:

Blasphemy founder and hedge fund manager Hale O’Keeffe is spiraling. Nothing in his life makes sense anymore—and nothing gives him pleasure, either. Not his work, not his club, and not domination. Feeling like a fraud, he turns to an old friend for help—and receives an offer he’s surprisingly tempted to take.

Real estate investor Alina Lane likes to switch things up—houses, investments, and partners, too. She enjoys commanding and being commanded. But not everyone likes to switch, so she’s stunned when sexy, brooding, crush-from-afar Hale attends one of her private parties and reveals he needs something more, something different. Something she’s always fantasized about but never thought he’d accept.

Soon, one scorching night turns into many, and Hale realizes he’s found everything he’s been searching for. But Alina won’t be anyone’s dirty little secret, forcing Hale to decide if he’s brave enough to admit to the other Masters of Blasphemy that he craves serving her as much as dominating her.


PREORDER SWITCHING FOR HER:

And don’t miss the complete Blasphemy series! Hard to Serve #.5 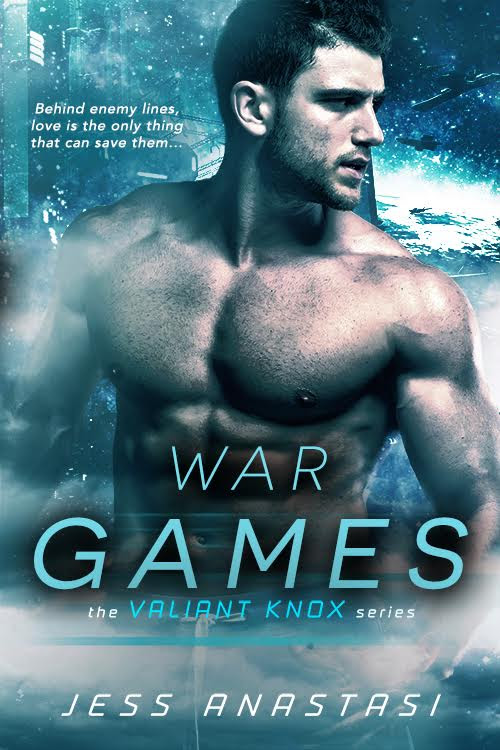 When one of her pilots is shot down behind enemy lines, Lieutenant Theresa Brenner will stop at nothing to save her before she’s captured and tortured, even if it means being part of the dirtside team led by Colonel Cameron McAllister. Bren might respect the way the colonel commands his men, but she’ll never trust Cam—no matter how charming he is—because he was responsible for her brother’s death. Colonel Cameron McAllister has a covert mission behind enemy lines to team with the Ilari rebels and overthrow the bloodthirsty dictator who’s torn their planet apart. The last thing he needs is to get sidetracked searching for a downed pilot, especially since it means having Lieutenant Theresa Brenner tag along. Not only doesn’t the frosty pilot have the ground game to keep up with his seasoned group, she’s a potential distraction with all those gorgeous blond curls of hers—and she might be just like her brother, whose foolhardiness got his men killed.

Amazon US I Amazon UK I Nook I iBooks I GooglePlay 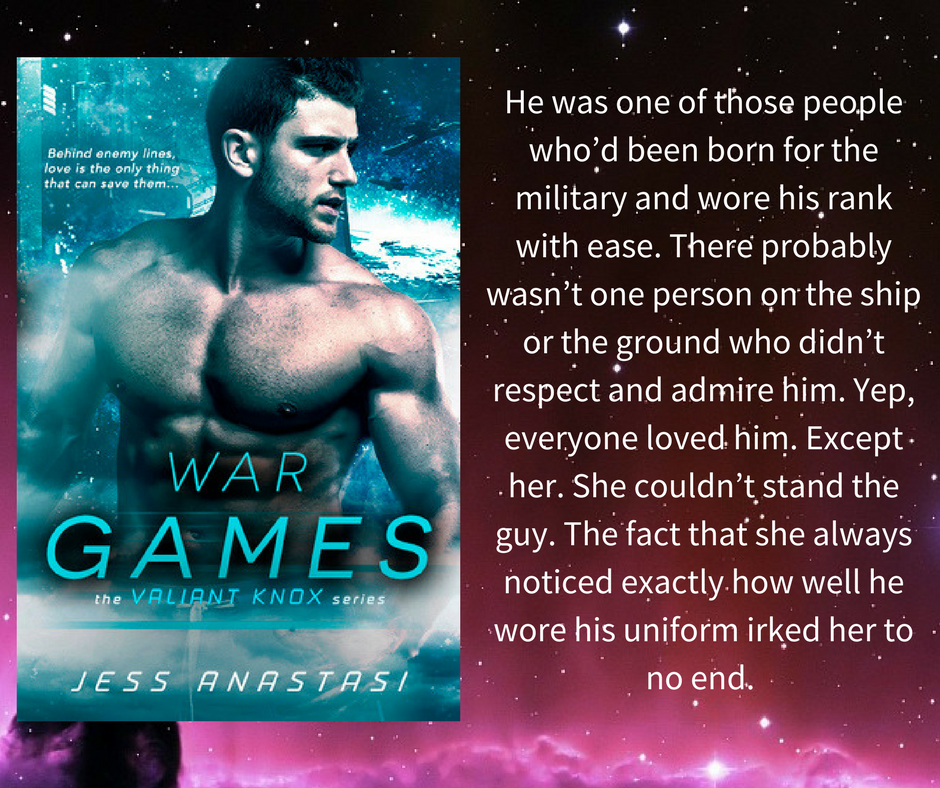 Jess has been making up stories ever since she can remember. Though her messy handwriting made it hard for anyone else to read them, she wasn’t deterred and now she gets to make up stories for a living. She loves loud music, a good book on a rainy day, and probably spends too much time watching too many TV shows. Jess lives in regional Victoria, Australia, with her very supportive husband, three daughters, two border collie dogs, and one cat who thinks he’s one of the kids.

Almost Everything by Christie Ridgway is AVAILABLE NOW!

Layla Parker travels to Crescent Cove to meet the soldier who tried to save her father in battle. Her dad’s final request was for her to enjoy a month of sun, sand, and fun along with the handsome combat medic, Vance Smith. Despite her sadness, she’s determined to follow through. Vance is flummoxed when he meets the full-grown daughter of his fallen officer. He’d expected a little girl. But a promise is a promise, and it gets harder by the day to resist the charms of the beautiful woman who threatens the safety of his scarred heart. But he’s honor-bound not to touch her…right? Except there’s the beautiful beach and the beautiful woman and the promise of a beautiful future…all a man could want if only he chose to risk everything.

**This is a previously published STANDALONE romance.

Christie Ridgway is a California native and author of over forty-five contemporary romances. A six-time RITA finalist and USA Today bestselling author, she writes sexy, emotional reads starring determined heroines and the men who can’t help but love them. She has a Career Achievement award from RT Book Reviews and twice has received their Reviewer’s Choice award for best contemporary romance of the year. Married to her college sweetheart, Christie lives in Southern California in a house filled with boys and pets. She writes as an escape from sports equipment, football on TV, and dog hair. Anouk - He’s a killer who took me with him. Although he was sweet, tender, and yet so very dominating a moment ago; that’s all insignificant now.

Ronin - I answer to no one. As the Prez of Lost Valkyries MC, people answer to me, not the other way around. Even if they place an order for a hit, I’m in charge and can flip the order back in their face along with their last breath before they leave this Earth. I’m ruthless, to everyone. No exceptions. Yet she made me take a turn.


**Books in the Lost Valkyries MC series will each be a standalone, short story romance. Every book is lust to love at warp speed. Grip your panties because they are going to be melting...so be warned!** 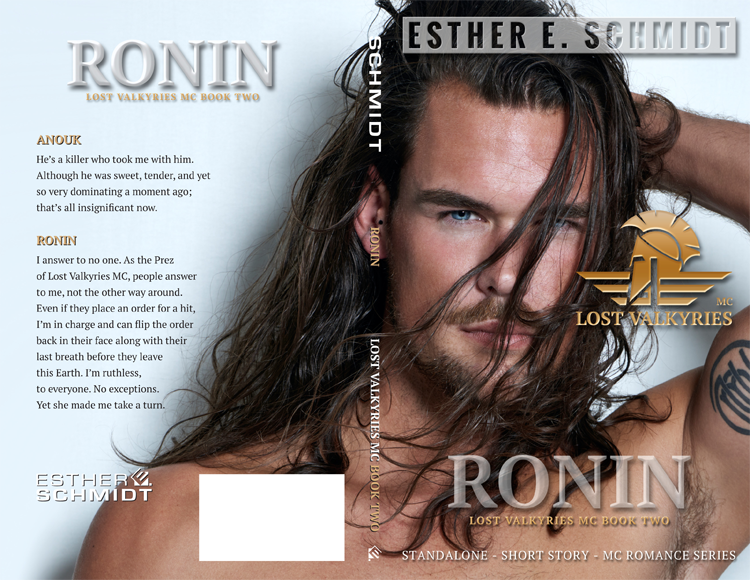