Jennifer Bernard is joining us to share her new release, Flirting with Forever! Check it out and be sure to get your copy today! 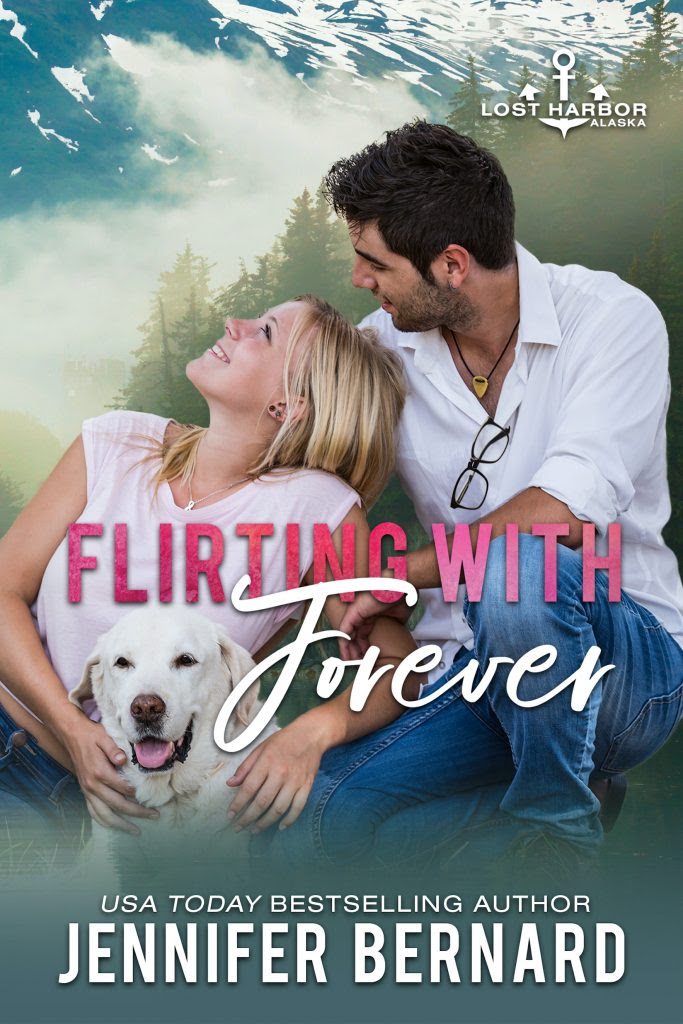 About Flirting With Forever:

A standalone romance in the Lost Harbor, Alaska series ...Dr. Ian Finnegan knows all about brains; hearts, not so much. He’s ready to find the perfect match, someone as logical and sensible as he is. When the matchmaker he’s hired suggests he improve his seduction skills, he’s not sure where to turn—until he plucks a damsel in distress from the side of a snowy Alaska highway. She might be a “hot mess,” but Chrissie Yates could be just the fun and flirty tutor he needs.Chrissie hasn’t been back to Lost Harbor since her eccentric recluse of a grandfather sent her away at the age of seventeen. Her family now consists of her beloved yellow lab and her broken-down car. Why Gramps has left her his property, she has no idea. She hopes to get in and out as quick as she can, but reconnecting with old friends and herquirky hometown makes her yearn for something she didn’t know she needed. Then there’s the sexy newcomer...Flirting lessons turn to something more passionate, as Chrissie makes Ian feel things he never dreamed. Is it possible he had the wrong idea about who’s right for him? Can he put his new skills to good use ... before a deadly storm threatens all he holds dear? 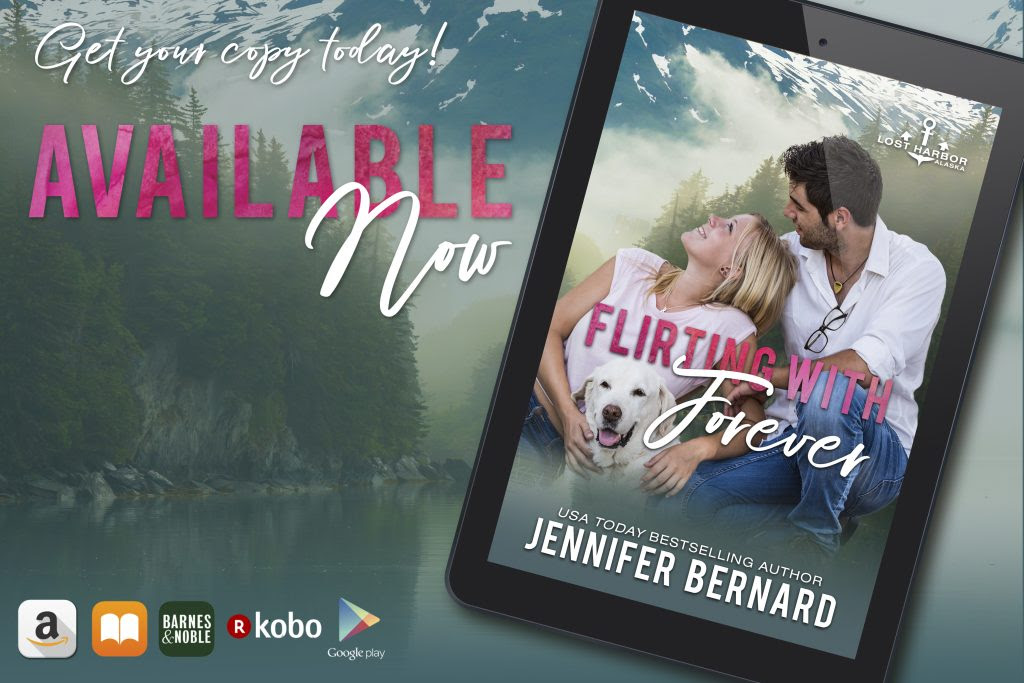 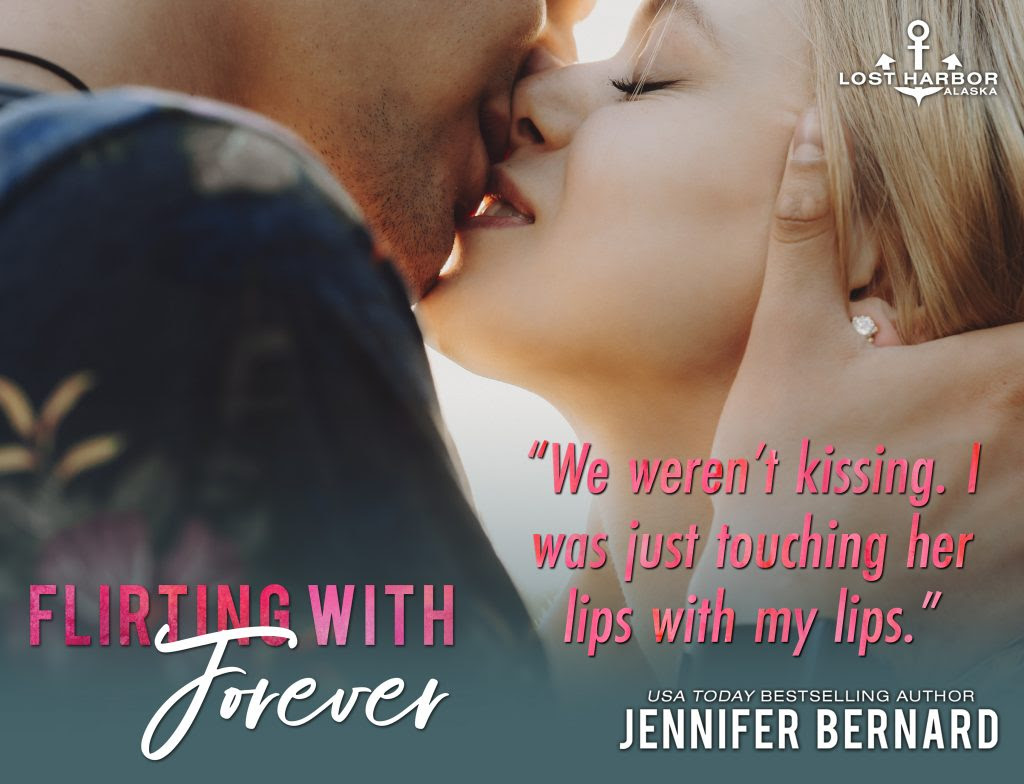 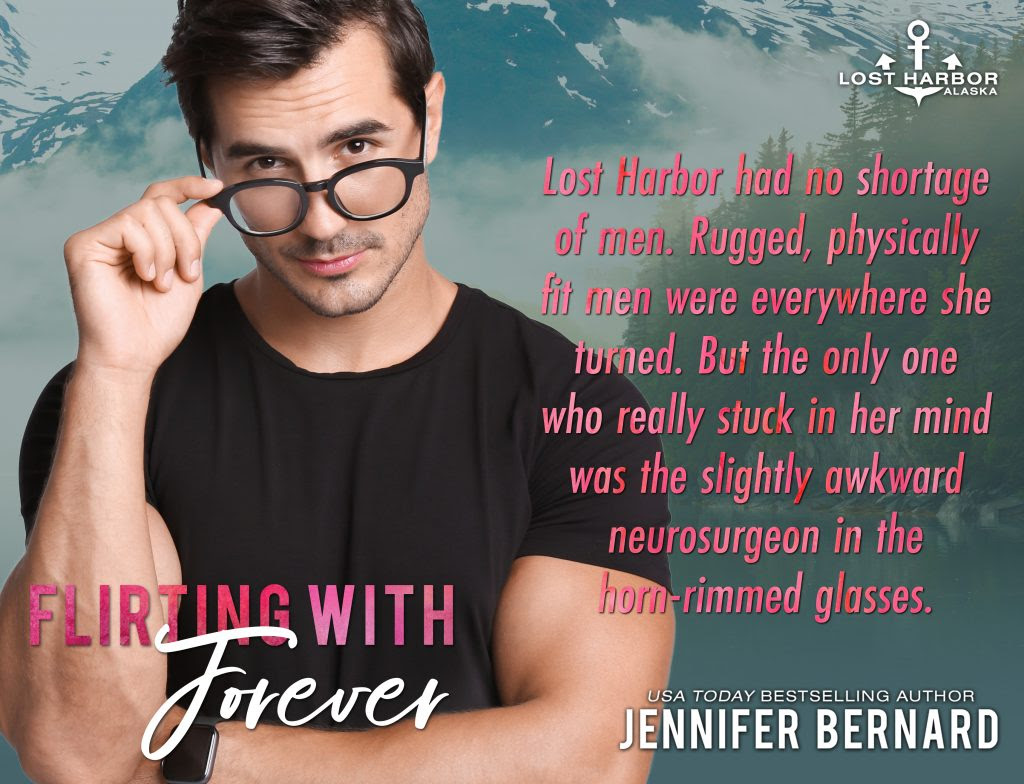 She slammed into someone, and looked up to see none other than Dr. Ian Finnegan, his horn-rimmed glasses knocked off-kilter by their collision. “Gotta go. Medical emergency.” “Oh no, I’m fine,” Ian said quickly. One hand held a clipboard, the other settled on her shoulder. “Are you okay?” “Yes, it’s just...” She drew in a breath. He looked good. Damn good. He also looked worried about her. He wasn’t even fixing his glasses because he was tending to her first. She reached up to adjust his glasses for him, but he was in the midst of transferring his clipboard from one hand to the other, and managed to bonk her on the head at the same moment she pushed his glasses. “Ow,” she said as her hand jerked. The unfortunate timing meant that instead of putting his glasses to rights, she knocked them all the way off his face. “Crap,” she exclaimed. “I’m so sorry!” He dove to grab for them, but they landed on the floor with an audible clunk. How heavy were those glasses? His clipboard went next, slithering from his grip as he focused on the glasses. It too clattered onto the floor. “Let me help,” she began, but he held up a hand to stop her.“Please, there’s no need.” She took a step back, feeling foolish. A sound came from her phone. Damn. She’d never ended the call with Toni. Wincing, she brought her phone to her ear. Toni was laughing so hard she could hardly get a word out. “What did I just hear?” she gasped. “Was that the handsome Dr. Finnegan?” “You shouldn’t eavesdrop. I’m hanging up now.” “I know there’s something going on between you.” “I told you already what’s going on.” “Yeah well, you didn’t tell the whole story. What I just heard was a throwback to teenage Chrissie, the one who always lost her cool around a boy she liked.”“Hanging up now.” “You can hang up, but you can’t hide.” She hung up and shoved her phone into the pocket of her flightsuit. Ian finally had his glasses back in the proper place, and his clipboard under his arm, and was putting himself to rights. “I’m really sorry about that, Ian. Chaotic Chrissie strikes again. Are your glasses okay?” “They’re fine. You?” “I’m fine. Embarrassed, but fine. I was on my way to get a hot chocolate, can I make it up to you with a hot beverage that I promise not to spill on you?” “I’m on my way to a consult, but maybe later?” “I only have another,” she checked her watch, “ten minutes.” She stepped aside to allow him to pass. “I don’t want to hold you up any more than I already have.” “No, it’s...you didn’t...I’m glad I...” The words seemed to bunchin his mouth, and he shook his head in frustration. “I’ve been hoping I’d...you’d...” She saw in a flash that he was affected by her presence. Stammering like a teenager. A sense of joy seized her—and freedom, as if bright wings were lifting her out of gravity. Without a second of forethought, she rose onto her tiptoes and kissed Ian on the mouth. His lips were warm and firm and fresh. For a micro-moment, it seemed he wasn’t going to respond. Too surprised? Unwilling? Uninterested? Various scenarios flashed through her brain, then evaporated as he returned her kiss—and then some. Ian might be awkward in some areas, but when it came to kissing he didn’t hesitate. He kissed her as if nothing else existed, as if there were no nurses hurrying past, no hospital walls around them. They could be floating above the roof, alone in their own private helicopter, for all the notice he took of the snickering orderly pushing a gurney past them.. 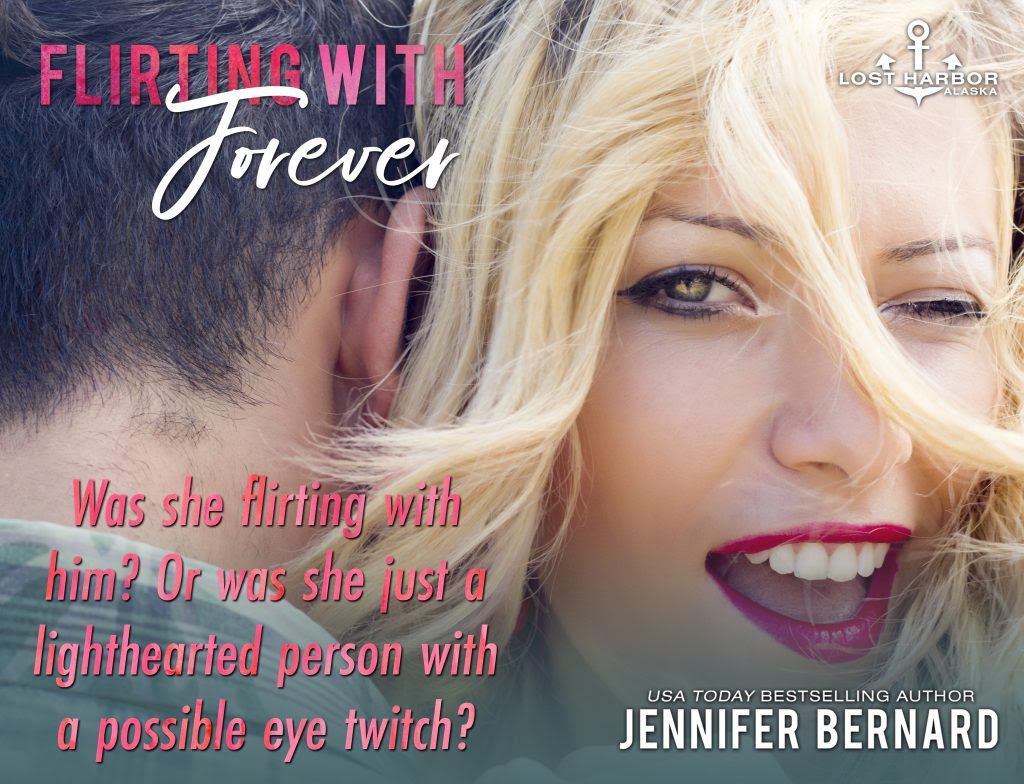 Jennifer Bernard is a USA Today bestselling author of contemporary romance. Her books have been called “an irresistible reading experience” full of “quick wit and sizzling love scenes.” A graduate of Harvard and former news promo producer, she left big city life for true love in Alaska, where she now lives with her husband and stepdaughters. She still hasn’t adjusted to the cold, so most often she can be found cuddling with her laptop and a cup of tea. Sign up for her newsletter for book news and fun exclusives. 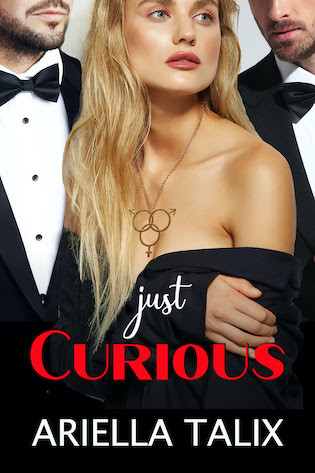 Willa Camden, successful author of steamy novels, becomes entwined with Jackson Mitchell, a brilliant billionaire, and his best friend Casey Melrose. Their love is shared equally, and Willa is not always in the middle.

Craving excitement, they embark on international adventures in the style befit-ting a billionaire.

Cyber threats, blackmail, and theft turn their world upside down. Their careers are jeopardized, and lives are in danger.

Fair warning: They curse a little and have sex a lot, so please don’t be shocked.Join them for a wild ride.

If you’re ready for a book that will have you on the edge of your seat and grab-bing for a fan, this story is for you.

Willa Camden squinted at the television. She was trying to figure out how she knew the woman giving her acceptance speech at the Oscars for Best Original Screenplay. Willa recognized the grating tone of the woman’s voice and the fake smile with overly whitened teeth. She appeared to be in her early to mid-thirties. The woman simpered at the audience and clutched the statuette to her chest. Her angular face was covered in gaudy makeup. It was too bad, Willa thought. If she hadn’t been so made- up, she might have been attractive. Unfortunately, her brassy-blond hair had a terrible case of dark roots.

“There is something so familiar about her...” Willa muttered to herself. She wascertain they’d met. Her name appeared on the screen: Deb Abbey. It didn’t ring anybells; she certainly wasn’t one of the screenplay writers Willa knew.

“I’m so proud of this work,” Deb enthused nasally to the audience. “It started out as a novel, but I just saw everything in my head so vividly, I changed the work over to a screenplay about a quarter of the way through. Thank you to the Academyand to the actors, director, and the entire crew who brought my words to life so wonderfully. I can’t name you all, but you know who you are. And thank you to the people who inspired me.” Music played, and Deb turned to head offstage.

Huh, not much of a speech—especially for a writer. Dying of curiosity, Willa grabbed her laptop and Googled the movie—which was apparently new—to see if that would give her any clue about the writer’s identity.

Within seconds, she had the trailer booted up. Her face went scarlet, and she began to shake. Like a ton of bricks, the memory of meeting “Deb Abbey” came back in a rush and settled in her chest, crushing her.

“Fucking bitch!” she hollered at her laptop as her world blew apart. Willa jumped up and thundered around her house, finally deciding she needed to get out-doors before she broke something in her rage. She went to the fireplace where they’d always kept a bowl of smooth beach stones. She loaded up her pockets and ran for the door where she kicked off her shoes. Thoughtlessly, she flicked on the backyard lights and stomped down the stairs to the beach, where she ran to the wa-ter’s edge. Hot tears poured unchecked down her face. She hadn’t even locked the door behind her. 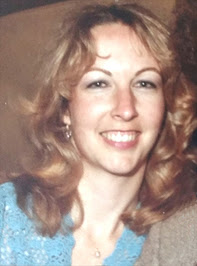 Ariella Talix is the nom de plume of a bestselling author who lives in America's Heartland.
Her goal is to preserve the dignity of family members who would rather not be asso-ciated publicly with a woman who writes such scandalous and stimulating novels. She's not going to stop writing them though.

Born and raised near the beaches of southern California, Ariella Talix traveled the world extensively and then found her true home in the Midwest. She has a sec-ond-degree black belt in Karate and has been a professional artist for many years. Her work is displayed in countries all over the world.

A sudden brainstorm prompted the first of her novels, Make Believe, and since then the ideas just keep tumbling out like an avalanche.